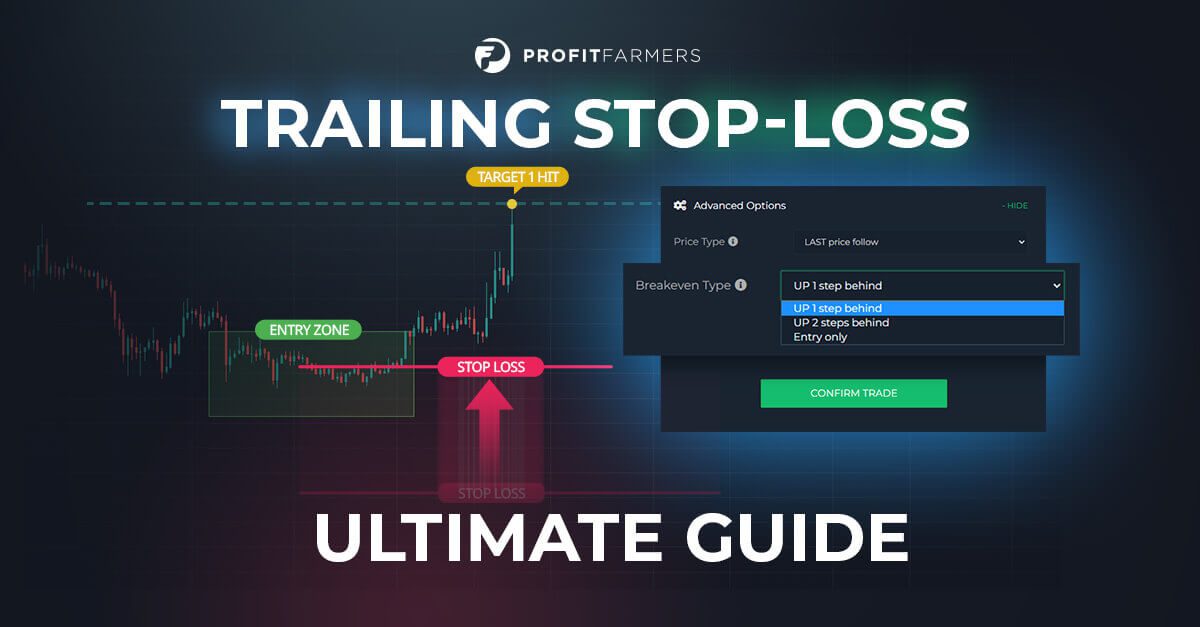 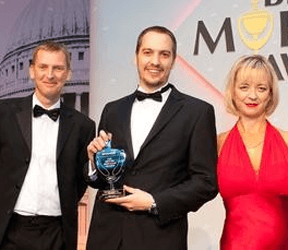 Matthew Tansley
ProfitFarmers Founder. Finance, Trading, and Cryptocurrency are his languages of choice but what drives him to keep ‘talking’ is his passion for helping others.
See All Posts
Contents

What is a Trailing Stop-Loss?

A trailing stop-loss is a game-changing order that moves your stop-loss up incrementally as an asset’s price increases to protect profits and limit losses. You set a certain percentage or dollar amount, and your stop-loss follows (“trails”) the asset price.

In English, this means if your coin’s price goes up, your stop-loss also goes up, so you can bank those profits and not risk losing the gains you’ve already made. The cool thing is that it caps losses but doesn’t cap your gains – at least not directly.

Here’s what could happen without one…

Say you buy Bitcoin at $40,000 and the price rockets up to $45,000. Yes! Huge profits. You’re thinking of starting a Guru YouTube channel now. Numb and euphoric, you climb into your bed, kiss your partner goodnight (it’s 4am, they’ve been asleep since 11), and drift off dreaming of buying million dollar NFTs of rocks and apes. 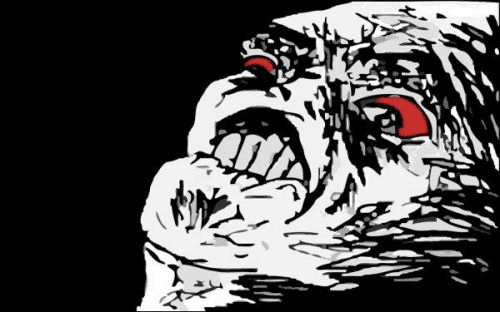 This is why pro traders use a trailing stop-loss, so when the price moves up they don’t have to wake up to the rage of losing everything if the price falls.

Still with me? Cool.

The rest of this guide is dedicated to explaining the what, why, and how of a trailing-stop loss. Including how to use one, how to set one, and why you might not even want to do it.

Probably not, but let’s just do it anyway. 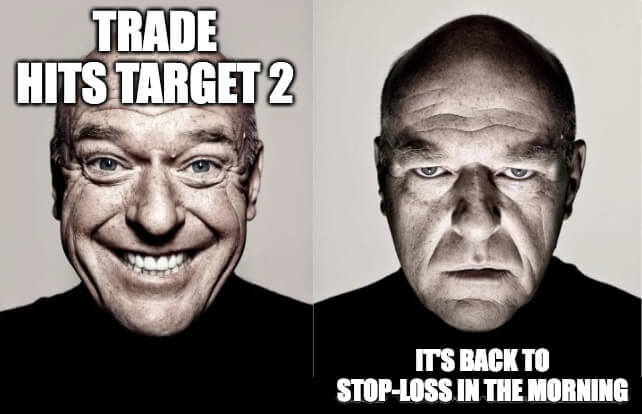 How Does a Trailing Stop-Loss Work?

A trailing stop-loss works much in the same way as a regular stop-loss, except when the price moves up, the stop moves up.

That way, if the price reverses, you don’t lose any of the profits that you’ve already gained.

So, in the beginning, you’d set this “moving stop-loss” at a point below the intended “entry price” – the price where you buy the coin – as a safeguard against losing too much on the trade. This is for a long trade, by the way.

Usually, traders set their trailing stop-loss at a percentage “behind” the price – typically anywhere from 5%-15%. So if the price moves up 5%, the stop-loss also moves up 5%.

While we’re on the topic of percentages…

Quick Question - What is a Good Trailing Stop-Loss Percentage?

A good trailing stop-loss percentage is anywhere between 5-15%, sometimes even 15%-25%.

It totally depends on the market at the time and how much price volatility you’re expecting.

However, there is no real way to tell you exactly where to set your trailing stop-loss…Unless you trade with ProfitFarmers.

Shameless plug incoming, but hear us out.

We use a group of high-probability trading strategies that we personally invented. They even have fancy names.

Think of it as a form of trend trading where we patiently wait for high-probability, low-risk trades based on undeniable market trends and human trading psychology.

Once we’re certain a trend is in action, we jump in at the best time to ride the wave and make steady gains. That’s why our Break-Even Stop-Loss features functions in a completely different way than anything else online.

Since our trades hit their targets so often (not bragging – just facts!), we use take-profit targets as trigger levels for the stop-loss instead of percentages.

If you’re interested in seeing what this feature looks like in action, check out our Break-Even Stop-Loss feature page.

Pros and Cons of a Trailing Stop-Loss

An Example of Our Break-Even Stop-Loss in Action

OK, so in this case, if you buy in at the entry zone of $39,000 – $42,000 and the price falls to $38,500, you would automatically be exited from the trade. You lost the maximum amount you were willing to risk, so lick your wounds and live to fight another day.

The problem is that crypto is BATS**** crazy.

So, what happens is traders often see the price go up and think “yes! MONIEZ!!”, only to wake up the next day and see the price had plummeted so far that their stop-loss was activated. #REKT.

All that profit you thought you had turned to dust. It’s a gut wrenching feeling. But with Break-Even Stop-Loss, you would have exited the remainder of your trade at Target 2 ($48,000).

Here’s how that trade would look with Break-Even Stop-Loss turned on:

Making sense? Check out the video below to see how it looks on a chart:

Advantages of a Trailing Stop-Loss

There are a few reasons traders love our Break-Even Stop-Loss feature: 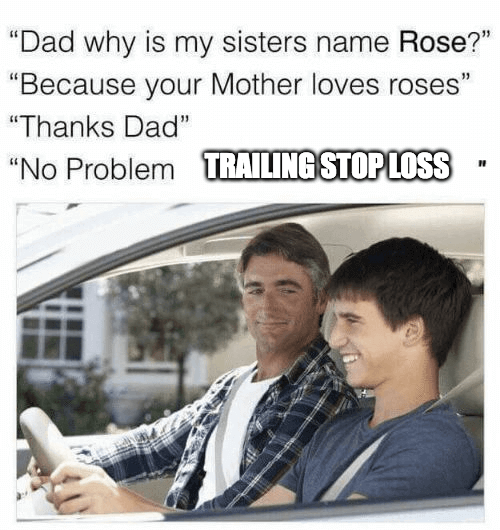 Disadvantages of a Trailing Stop-Loss

Before we get into the disadvantages of a trailing stop-loss, you need to understand a bit more about the bloodbath of crypto day trading.

That’s crypto. Sometimes you make a fortune and sometimes you get rekt. It takes a lot of nerve and patience to be a long term profitable trader.

With that in mind, the main disadvantage of a trailing stop-loss is that sometimes the price of a coin will dip before rocketing up to reach higher targets, which could have made you massive gains.

If your stop-loss moves up, you’ll get “stopped-out” of a trade. Here’s an example: 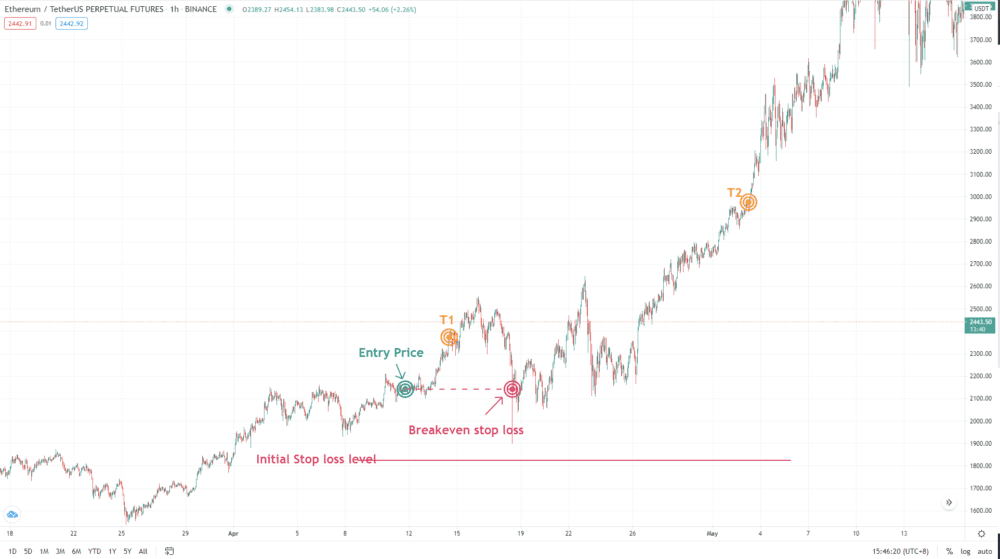 Here the stop-loss moves up to the Entry Price, and when the price dips down, the trade is exited. But notice that had you just kept the stop-loss at the original position, the trade would have continued and you’d have made a killing at Target 2 and beyond.

Fortune does favor the bold. 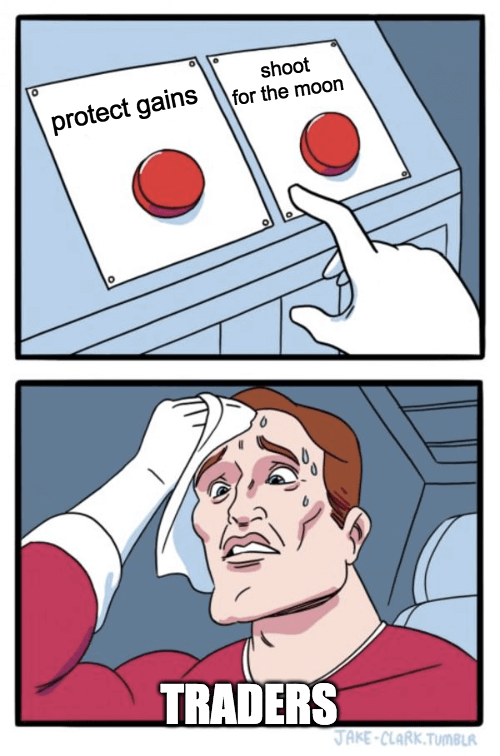 How to Set a Trailing Stop-Loss

There are two ways to set a trailing stop-loss. One is a pain in the A** and the other is as simple as flipping a switch.

In option one, you determine a dollar amount or percentage, and manually set a trailing stop-loss in whichever exchange you happen to be using. There are two things you need to keep in mind when setting your trailing stop-loss manually:

OK, so you need to do all of that just to set it properly. And some exchanges, like Binance, cap the percentages. Binance caps theirs at 5% and it’s only for Futures Trading.

This is done PURPOSELY to make it more difficult for you to trade, and probably to benefit whichever whales are running the markets up and down at warp speed. The harder it is for you to execute professional trades, the easier it is for them to manipulate things.

If you want to learn more about how trading is a rigged game, check out our article on why the whales always win.

The other way is just use ProfitFarmer’s Break-Even Stop-Loss. With just the flip of a switch, it does all that calculation for you.

Better yet, that calculation isn’t even needed – our trading strategy has the optimal stop-loss strategy baked into it.

Other systems require you to do this all manually, and that’s IF they even offer it. That usually requires years of experience, technical analysis, or sitting there all day manually moving your stop-loss up as the price increases.

At ProfitFarmers, it’s literally all done for you just by clicking a button.

There’s quite a bit of confusion around these two, so let’s wrap up by sorting this all out.

If you want to understand the difference between a stop-loss and stop-limit, we need to start with market orders vs. limit orders.

Basically, a market order tells the system “hey, once this stop-loss price hits, sell, sell, sell. And get it done as quickly as possible no matter what happens”.

A limit order on the other hand says “hey, once this stop-loss price hits, sell, sell, sell, BUT not below this limit price that I’ve set”.

Flashback to our previous BTC example.

With a stop limit, you’d also set that same stop-loss, but then you’d set an extra limit BELOW that stop-loss telling the system “don’t sell below this price”.

The benefit of a trailing stop limit is that prices might crash down then spike back up. If they do, you didn’t sell off at a super low price.

The disadvantage is prices might spiral out of control down to god knows where, and you didn’t get out while you still had the chance. 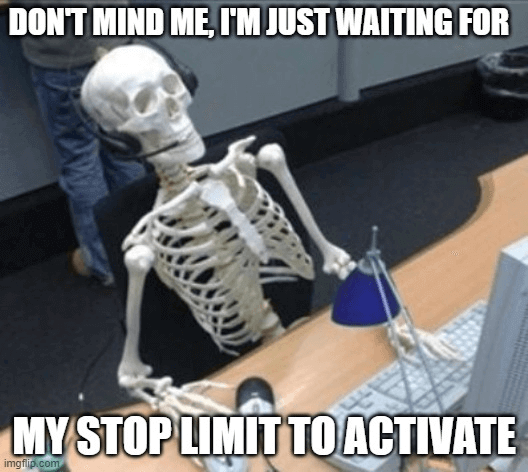 Have you heard of price liquidation cascades? No?

Imagine a long line of dominoes starting from just above your chosen stop-loss price at $38,500 all the way down to $0.

When the degenerate traders above you get stopped out they do a market sell and get out “now now now, no matter what happens”, just like we mentioned above.

The dominoes (stop-losses) cascade down faster than a waterfall, and sometimes that means down to $0.

If you went with the trailing stop-loss you got out and maybe took a bit more damage than you’d lined yourself up for.

But if you used a trailing stop limit, you’re left swinging your candlestick in the wind and thinking about the job center opening hours… 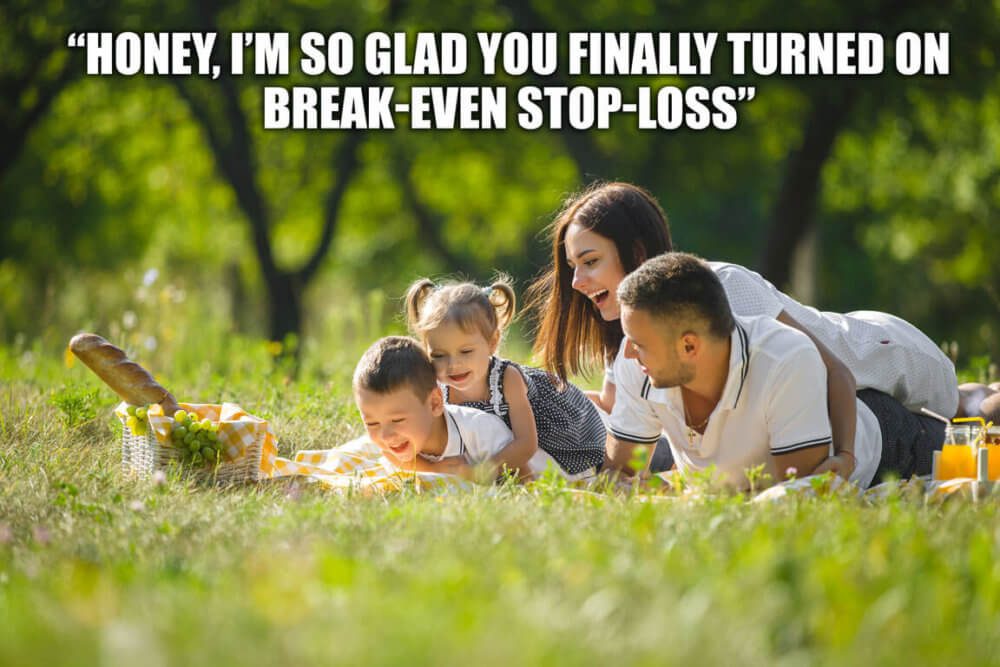 Crypto trading is absolutely BRUTAL. Have you met a happy trader? Doubt it.

Setting a trailing stop-loss is a low-risk, medium-reward strategy that focuses on the stable, long-term growth of your trading account. Now, maybe you can actually find some happiness in trading.

When you set one, you lock-in profits and protect against losses at the expense of perhaps missing out on major gains if the price dips before rocketing up to higher targets.

It’s not perfect, but if you prefer to minimize risk, live with peace of mind, get some actual sleep, you can either learn all of the technical analysis and strategy of setting your own trailing stop-loss or you can try ProfitFarmer’s automated Break-Even Stop-Loss feature.

By setting one, you allow yourself to step away from the charts and live a normal life rather than monitoring the prices all day.

You can live with peace of mind knowing you won’t lose profits in a trade.

There’s no real single way to calculate your trailing stop-loss. It totally depends on your risk tolerance, trading strategy, the coin in question, and the market conditions.

However, with ProfitFarmers, our system automatically calculates it for you according to our trading strategy.

To place a trailing stop order, you need to calculate your callback rate (the percentage), the activation price, and order quantity.

Matthew Tansley
ProfitFarmers Founder. Finance, Trading, and Cryptocurrency are his languages of choice but what drives him to keep ‘talking’ is his passion for helping others.
See All Posts 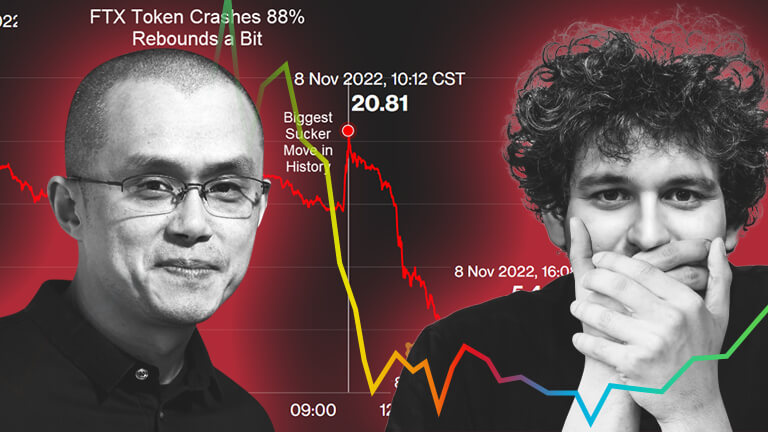 Capitulation, Anger and Depression – A Story of Politicians, Pedophiles and Ponzis 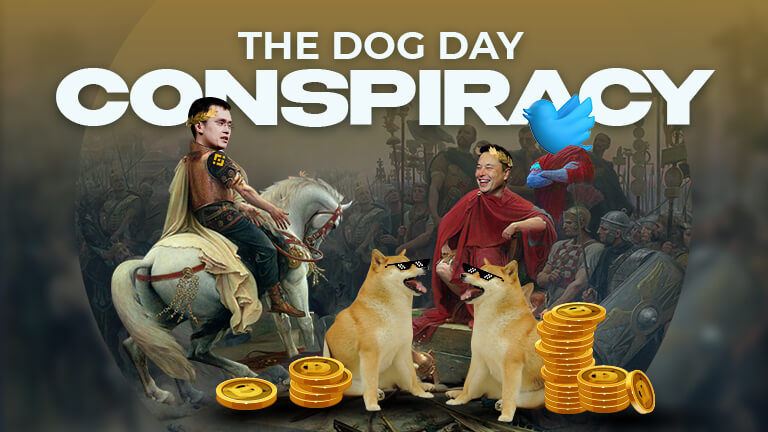 See all the past video and blog result-breakdowns.

Best Trade of the Month 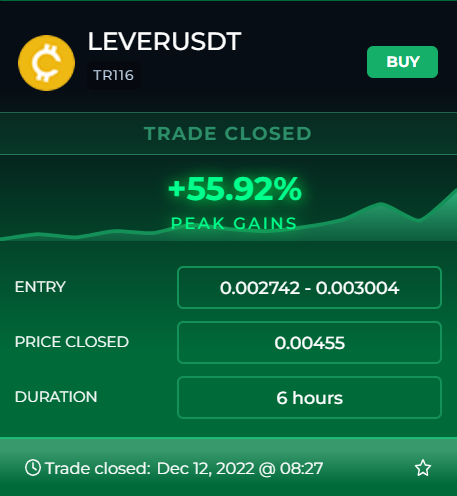 ALL IN ONE PLACE

ProfitFarmers’ tools for traders of all levels.

See our members are farming success from all around the globe 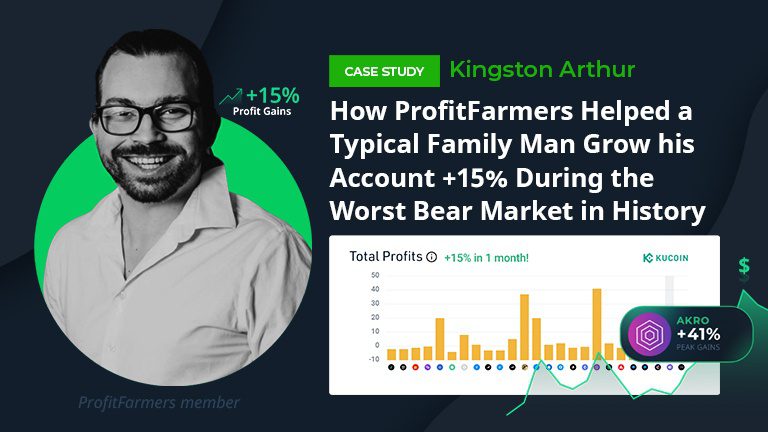 How ProfitFarmers Helped a Typical Family Man Grow his Account... 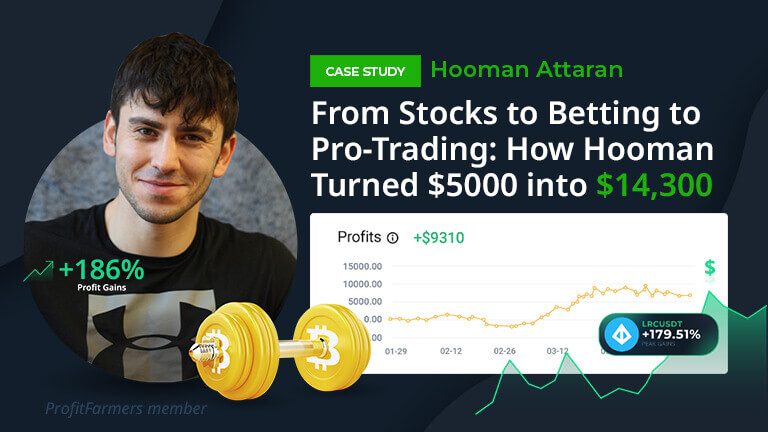 From Stocks to Betting to Pro-Trading: How Hooman Turned $5000... 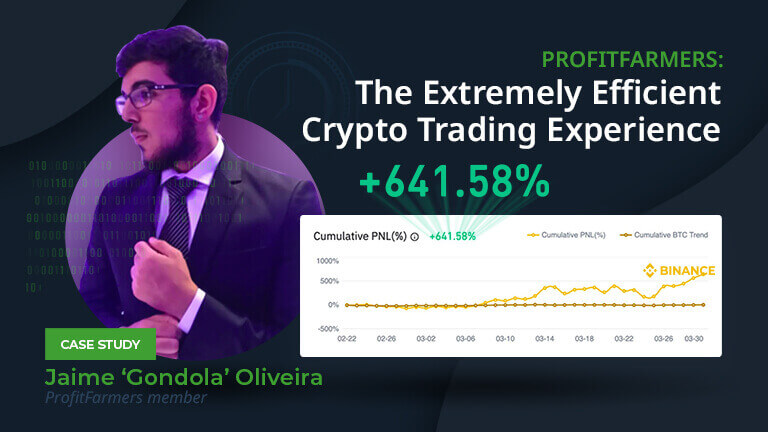 Jaime ‘Gondola’ Oliveira How a Software Engineer Used ProfitFarmers to... 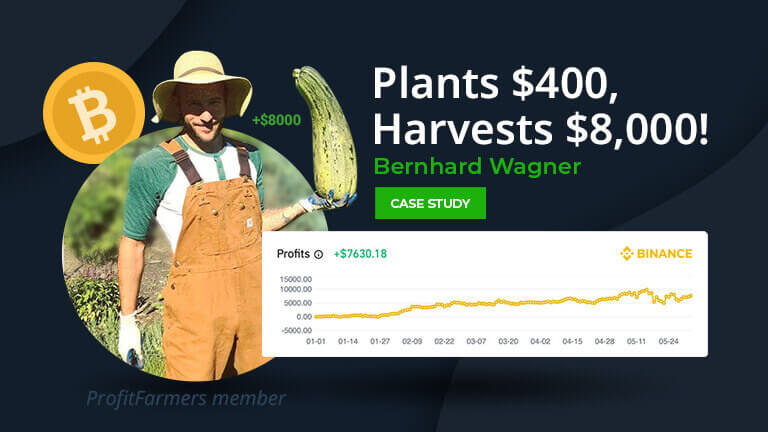 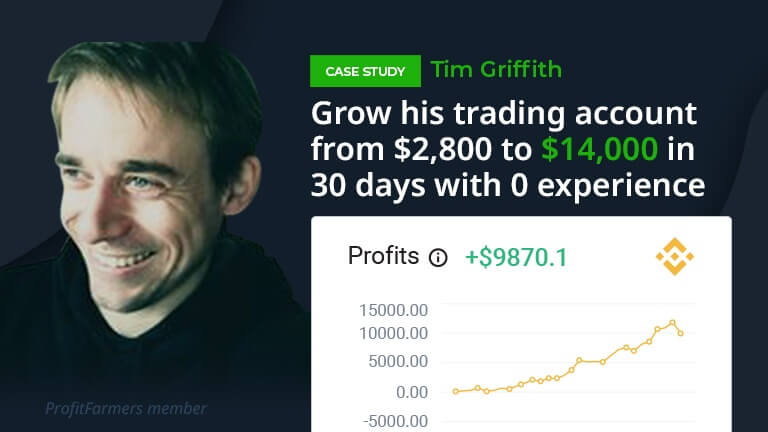 How ProfitFarmers helped Tim grow his trading account from $2,800...

REVEALED: THE NEXT
EXTREME CRYPTO CATALYST!

REVEALED: THE NEXT
EXTREME CRYPTO CATALYST! 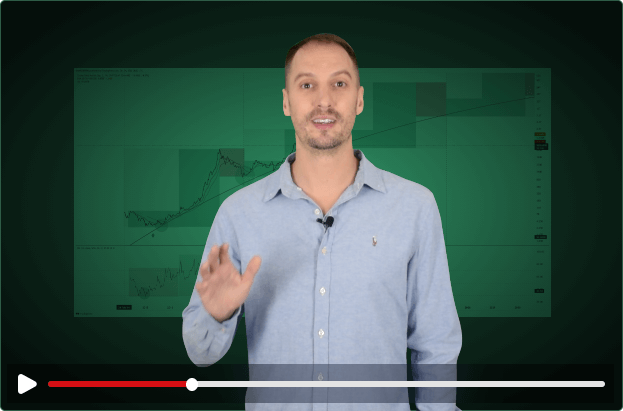