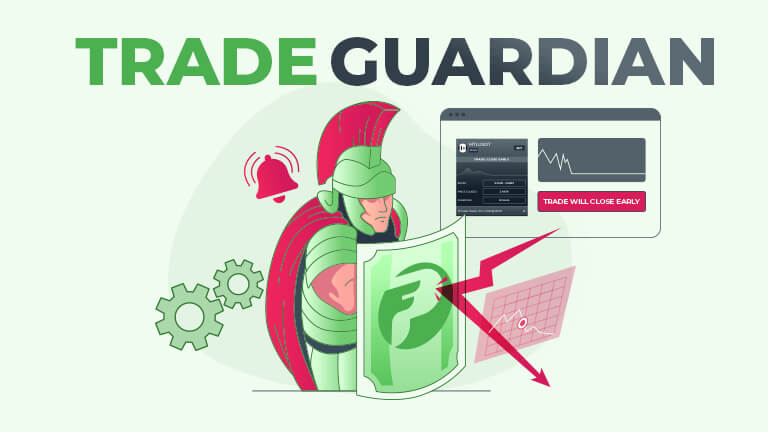 Missing out on our close early notifications? Get rid of the close early heartache! We’ve added a feature to the platform called the Trade Guardian.

You can find the option to toggle this to ON/OFF in your Account settings under auto-trade.

So what is it?

By toggling this feature ON, the Trade Guardian will attempt to automatically close your trade for you when the system marks a signal as close early.

Here is an example of what the trade guardian will do:

The Trade Guardian will do different things depending on whether you are currently in the trade (active trade) or are still waiting to get your buy orders filled.

If it is an active trade, it will automatically trigger a sell order and your position will be closed/ coins will be sold at the price* when the system decided to close the trade early.

If you are still waiting to get your buy orders filled, it will automatically cancel your open order.

This feature is still in its early stages, so it’s not without flaws.

Must read! Here are some known issues that you might find inconvenient with the Trade Guardian:

You will receive a notification/email for every take profit target that remains open, which could result in you receiving a lot of notifications/emails when a trade is closed early (you can adjust notifications in your settings).

There is a very small chance that the trade guardian will be defeated and an error will occur when it tries to automatically close the trade early. It is recommended to keep your Trade Guardian notifications ON, so that you will be alerted should it happen and you can act accordingly.

We will be looking to improve this experience in a future update.

If you opted to have Trade Guardian OFF, then you can manually close the trade via the close early notification pop up or in your open orders and history.

A word about our ‘close early’ trades

The reason why some trades close early is because the algorithms will close the signal when the trade has ‘strayed’ from the path we expected it to go.

Once you see it ‘closed early’ in the dashboard, it means the dashboard will no longer monitor the trade for you.

When we close the trade, it just means that the algorithms have detected that trade is no longer doing what we like and decided that it is safer to close the trade. However, it does not mean that it will automatically go to stop loss or the signal will now be reversing it’s trend. This is the part where the human pilot (you) comes into play. You now have to decide whether it is still wise to stay in this trade or will you follow the system and close.

What is essential to know about these close early trades is that the close early was intended as a notification/warning, not as a hard ‘you must sell now’.

In many cases closing early at the time of the alert is smart, but there are also many times where you can wait for a small bounce and exit with a profit or avoid a loss, or if your own analysis says that the trade still looks good, you can stay in it and see how it goes.

An example is this RUNEUSDT trade. It ‘closed early’ at 6.151 – but then the price went up to 7.863. So to the traders that stayed in this trade, they would have reached target 1, but the dashboard will not display it. 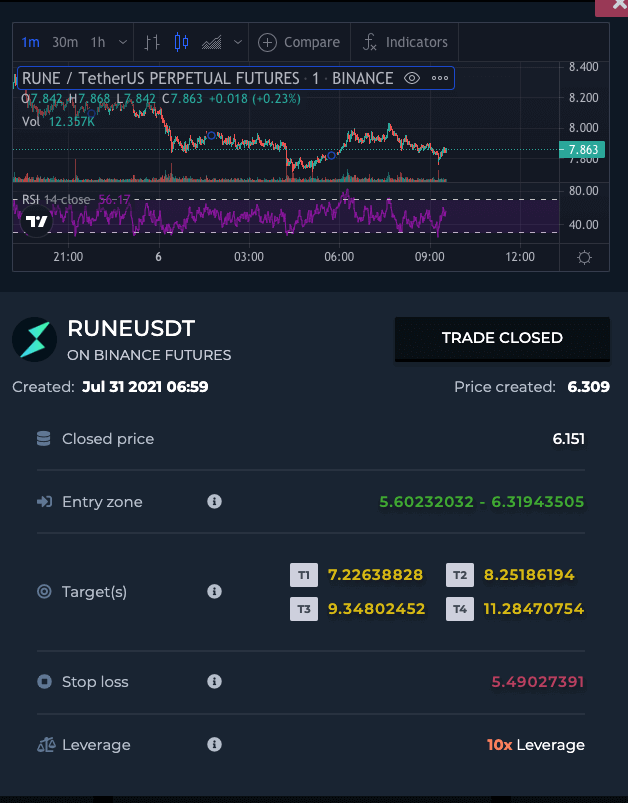 It was closed early because it no longer follows the strategy that was programmed to it, but it does not automatically mean that the trade will 100% be going in the opposite direction. It is definitely better (and safer) if you follow our suggestion when you are notified that signals will be closed early but please remember that the signals are meant to be guides (or co-pilots), the ultimate decision lies in the hands of the user (the pilot).

Whilst sleeping or away from the screens (where you are not able to make decisions) then activating Trade Guardian is usually a great idea!

The Trade Guardian will not guarantee you a 0% loss once it closes a ‘close early’ trade, and there will be situations where you would have wished you left the trade running. There are Pros and Cons to everything in life!

Other fixes and improvements on ProfitFarmers:

Some other fixes that came with the Trade Guardian update:

If the trade being closed early is a Spot trade: 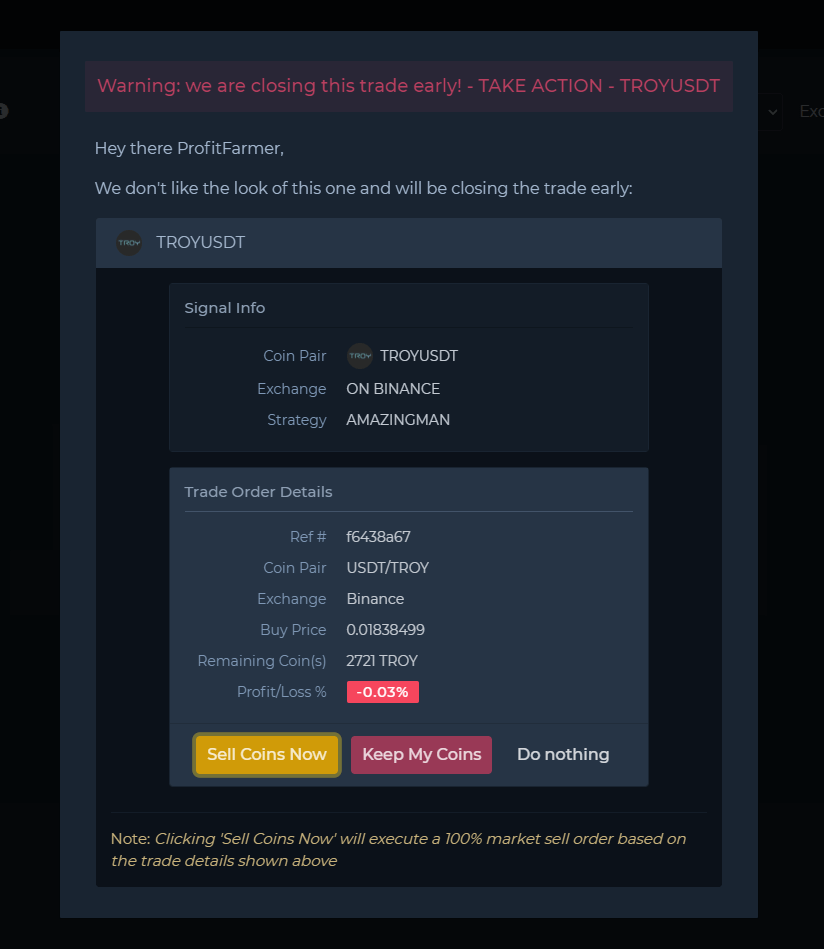 If the trade being closed early is a Futures trade: 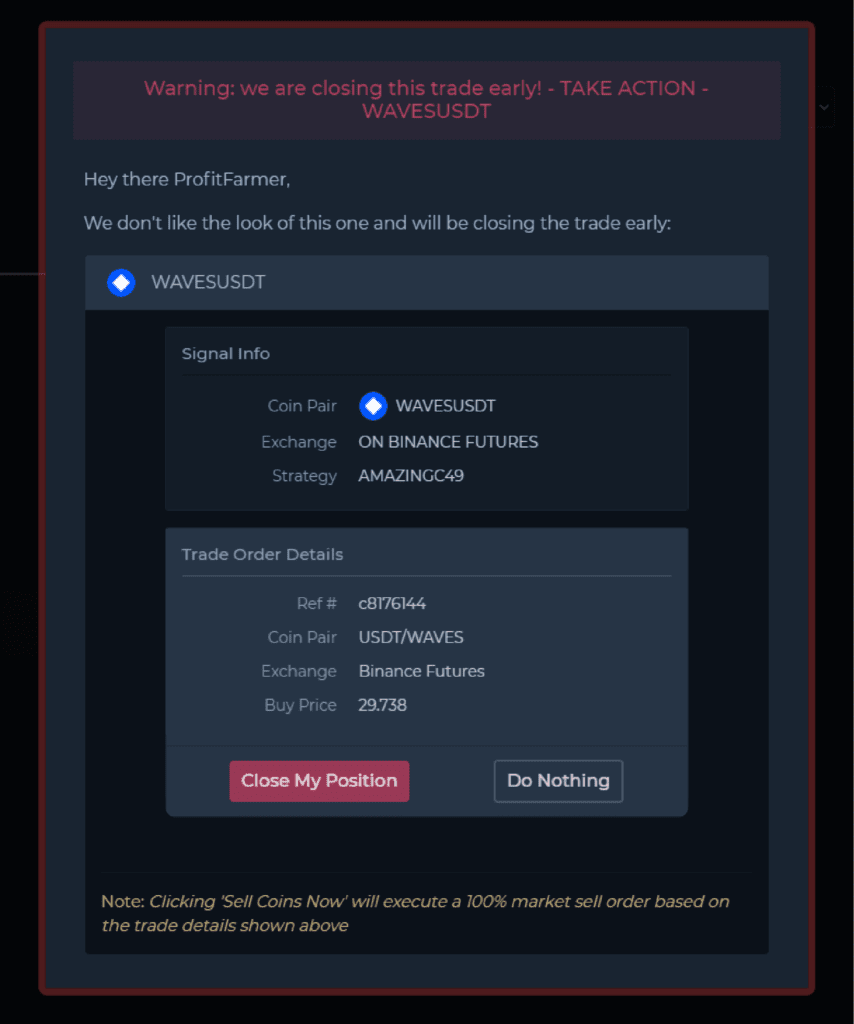 Changes to the General Notifications

A few changes in design have been made to the settings user interface.

The Beta Server is Being Removed

There is currently nothing in the Beta servers, so it is being removed for the meantime. 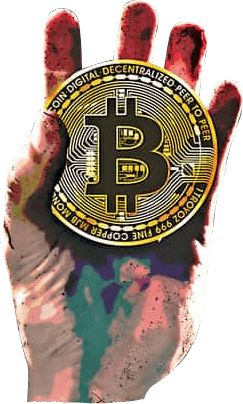 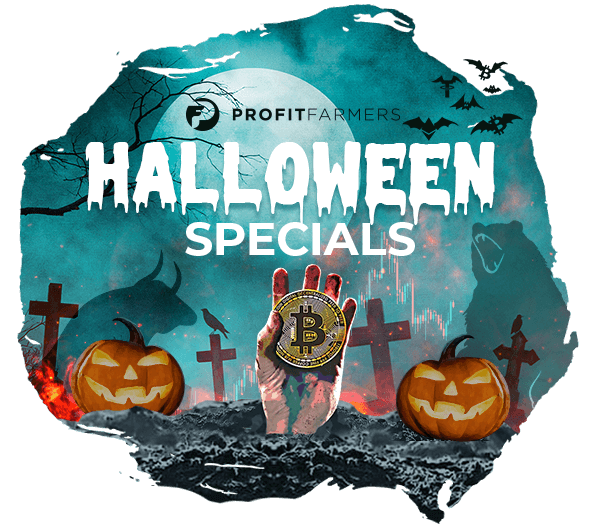