Trailing Stop-Loss automatically moves your stop-loss up to lock-in profits and prevent winners turning into losers. Just toggle it on and sleep easy knowing you can’t wake up to disaster.

The Problem: Why Use a Trailing Stop-Loss?

Does this sound familiar?

It happens every day.

There’s nothing more gut wrenching than seeing a winning trade turn into a loser overnight. Crypto is insanely volatile – you literally never know what’s going to happen. The market never sleeps, so you never sleep either.

Now do you see why most traders either quit or go broke? It’s a MISERABLE life.

Break-Even Stop-Loss – also known as a “trailing stop-loss” or “trailing stop order” – is an ingenious solution that automatically moves your stop-loss up as your trade progresses, locking in your profits and protecting you from unnecessary losses.

Normally, you have to monitor your trade and manually move your stop-loss up. Some systems force you to put in hours of extra work just to lock-in your profits.

But with our trailing stop-loss turned on, our platform automatically moves your stop-loss up to the next step as your trade progresses. That way, you can go about your day and not stress about a winning trade turning into a disaster.

The Break-Even Stop-Loss works a lot like a standard trailing stop-loss in crypto, but it comes with a plot twist. Here’s an example of how it works:

Other systems force you to move your stop-loss manually, requiring hours of waiting and monitoring. With ProfitFarmers, you just need to click one button, and the system moves it for you

Inside the trading form, just scroll down to Stop loss details and click Breakeven.

It’s so easy you don’t have to be a pro to trade like a pro.

ProfitFarmers, an all-in-one crypto trading platform that lets anyone trade like a pro, is now 100% free to use.

Open an account, connect your Binance.com, and start trading – you can get started immediately for $0.

Trailing Stop-Loss is a Total GAME-CHANGER

Breath easy once your trade reaches target 1. Your stop loss automatically moves to your entry price. This means that you are now 'guaranteed’ to make a profit! Even if the price plummets, you will exit your trade at your entry price plus the profits gained from target 1.

The crypto markets can go from mooning to crashing in a blink of an eye. By then, it may be too late to react. Protect your funds from sudden market trend changes by activating the break-even stop-loss.

Choppy markets are extremely stressful. The markets can betray you at any moment. The break-even stop-loss ensures that this causes as little damage as possible.

Remove the stress by spending less time watching the charts

Free up some time by spending less time looking at charts, and use this time to enjoy your life.

This isn’t just another boring trailing stop-loss. Our Break-Even Stop-Loss comes in 3 different forms to help you navigate any market at any time. Choppy markets, low-risk, high-risk – you can customize it to fit your mood (traders are moody all day every day).

Play it safe or aim for the moon. You’re in complete control – we just work here.

Option 1. Move SL UP (1 step behind) when TP target hits

Your stop loss will move to the level below the highest take profit level hit. (This is the default setting).

You’ll take this option when you want to ‘set it and forget it’ but want to keep risks down. 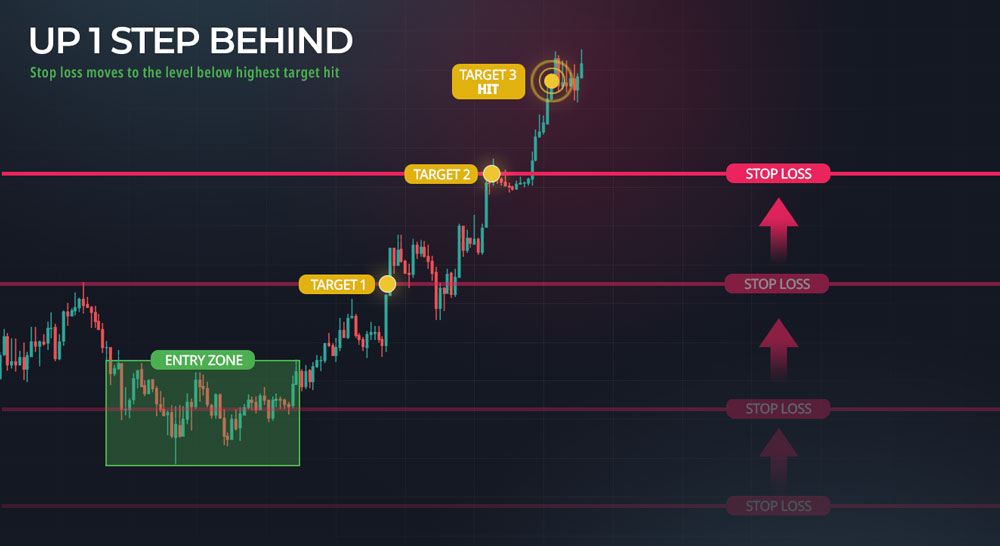 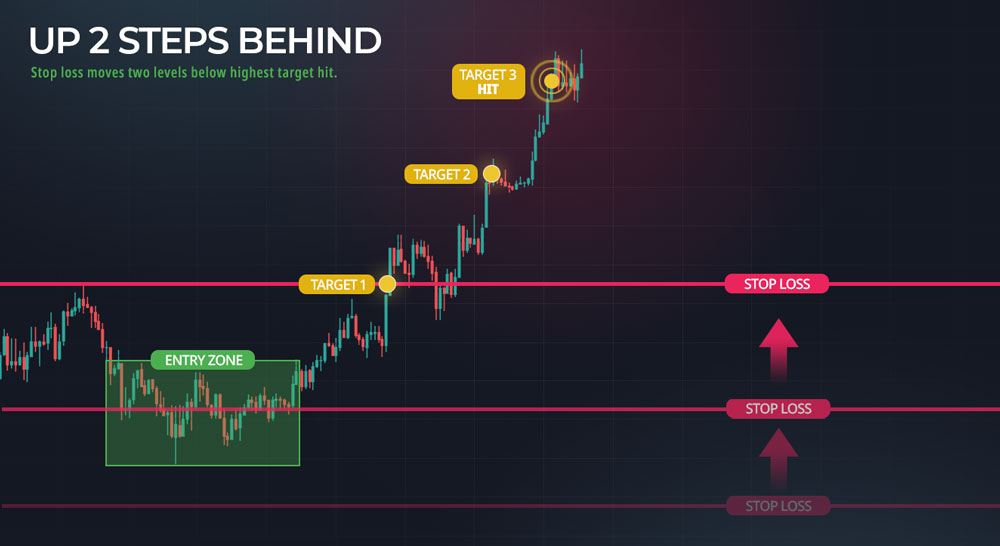 Option 2. Move SL UP (2 steps behind) when TP target hits

This option is for when you expect the market to chop around a little bit at the entry phase and don’t want the chance of being stopped-out after just target 1. Perfect for swing trade setups.

This option sets your stop loss level to move to your entry price level upon hitting Target 1 but remains there regardless of the number of targets hit thereafter.

Early protection and then full control as your trade develops. 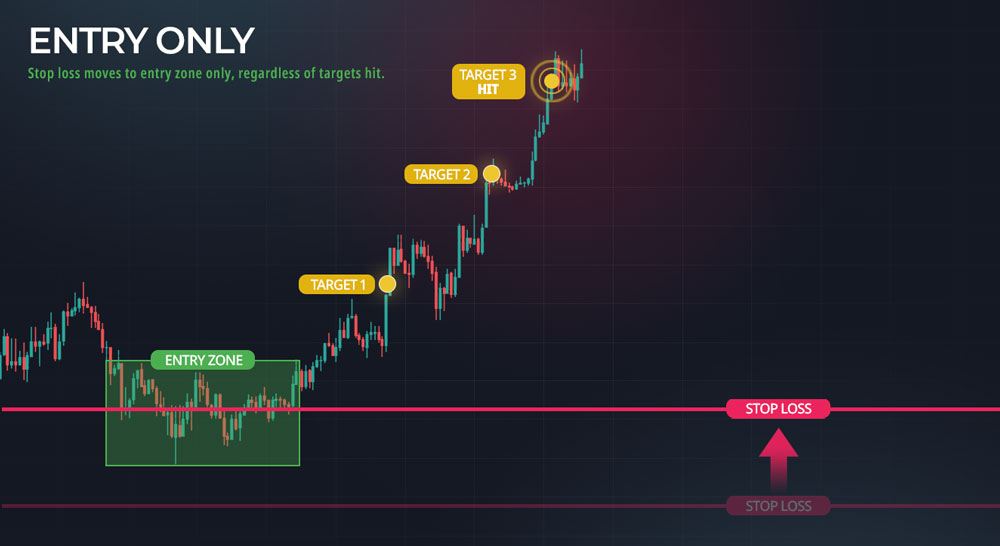 Disadvantages of a Break-Even Stop-Loss in Crypto

Crypto is volatile as all hell. You don’t need us to remind you how MADDENING this game can be.

The Break-Even Stop-Loss (BESL) will keep you safe from disaster, but could also “stop you out” of a trade too early. This could limit your potential for gains. It’s all up to you and fully depends on your risk tolerance (stick to your strategy!).

The price could hit target 2, then drop back down to target 1 only to bounce back up and hit targets 3 or 4. If you activate BESL, you’ll exit the trade when the price drops down to target 1, meaning you’d miss out on the extra gains at targets 3 and 4. How much risk are you willing to take?

Luckily, this disadvantage is mitigated by our Break-Even Stop-Loss option 2.

How will you use the Break-Even Stop-Loss to your advantage?

Elon traded this ICPUSDT signal, with the following details: his ICP (A crypto called Internet Computer) buy price is 21 USD with a trading size of $1000, and stoploss of $19. 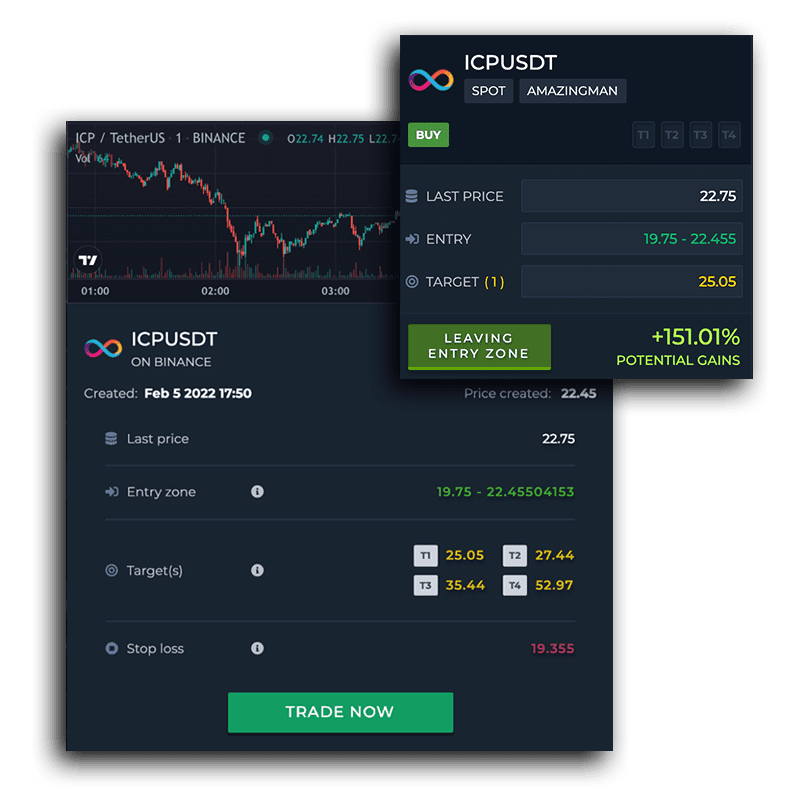 Elon was about to go on vacation, so he didn’t have time to watch the charts. He wanted his funds to remain safe so he did the smart thing: he activated break-even stop-loss and set it to Option 1.

This is how his trade played out while he was drinking margaritas by the beach.

After a few days, his target 1 and 2 were reached and sold 20% of his total coins. Target 3 was just above a strong resistance zone, which unfortunately ICP failed to break through.

The coin bounced at a price of $32, and began spiraling down all the way to Elon’s original stoploss of $19.

BUT because break-even stop-loss was activated, his stop loss moved to his Target 1 price (the level below highest profit level hit) – where the remaining 80% of his coins were sold!

When the price started tanking, Elon made a profit of 19% rather than losing 10% on most of his coins. Well played!

Elon had another trade, BTCUSDT (Bitcoin), with the following details:

Again, he set the bulk of his coins to sell at Target 4.

Elon wanted the protective powers of break-even stop-loss, but he didn’t want to get stopped out of the trade prematurely.

His trade hit targets 1 and 2 in quick succession. When the coin hit target 3, Elon’s stop loss moved to target 1’s price ($42,300), ensuring he doesn’t lose money should the trade start going in the wrong direction.

Due to the market’s nature, Bitcoin consolidated for sometime within the 43k-46k range, hitting targets 2 and 3 repeatedly.

But since he used Break-even stop-loss option 2, there was enough ‘room’ for the price to move around which allowed his stop loss to remain untouched at $42,300 (target 1).

After a few days, Bitcoin continued its uptrend to hit target 4 where it sold the remainder of Elon’s coins for a 54% gain!

That’s how you keep relatively safe while aiming for the moon!

Disclaimer: This is obviously an example of the break-even SL in action. Individual results will vary based on market behavior.

Be wise like Elon. If you don’t have time to actively trade and look at charts, set your stop loss to breakeven so you don’t lose money when your trade hits its targets. Protect your gains!

Now you know what it does, it’s time for you to join the list of real life Elon Husks who use our tools to find success in trading:

It doesn’t matter what you call it – break-even stop-loss, moving stop-loss, trail stop order, or trailing stop-loss for crypto – our Break-Even Stop-Loss feature is a literal game changer.

This is a gamechanger for serious traders:

The only downside is you might miss out on some potential gains. It all depends on your risk tolerance! Happy trading!

How a Software Engineer Used ProfitFarmers to take back his most valuable asset:  Time​
READ FULL STORY

What are you waiting for? A system that provides an average 78% signal winrate paired with the protective powers of the break-even stop-loss feature is yours for the taking. Join ProfitFarmers now and improve your trading results!

In 2021 we created a total of 2573 signals with 2151 of those turning into completed trades, hitting either a stop loss or at least 1 target!

1680 of our completed trades hit at least their first target! That’s a strike rate of almost 80%!

You can learn more about how signal statistics are calculated here.

Visit Results Hub
In partnership with: 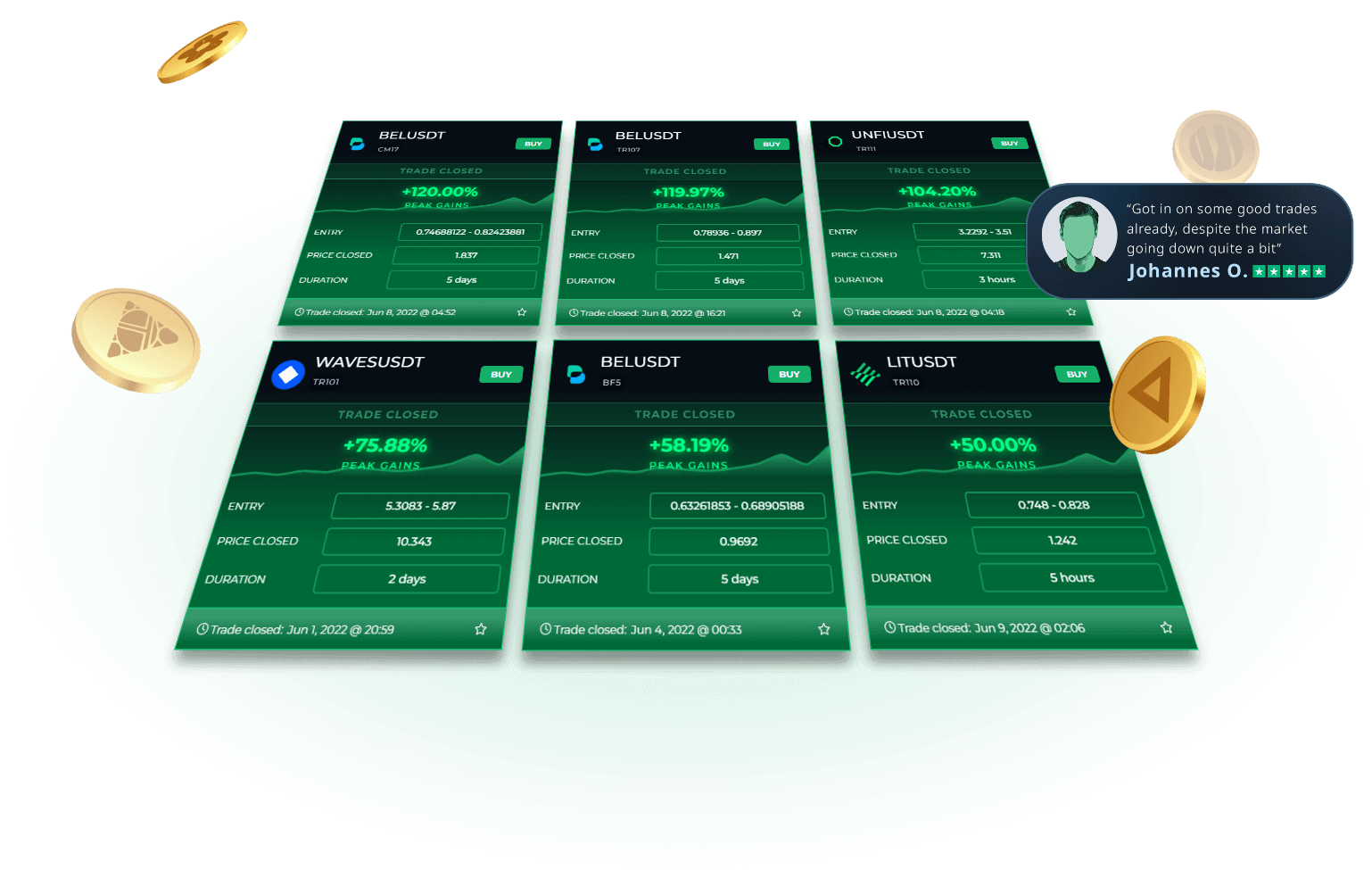