Here are the biggest news, updates, and stats for JUNE.

To better understand June, let’s do a quick summary of 2021 so far! If you’ve been following crypto for the past few months you know that it’s been a roller coaster ride of emotions (which is exactly why you need a Crypto Trading Co-Pilot in your life!).

Early in 2021 Crypto prices were going up almost vertically – Euphoria was in the air, early investor were striking it rich, celebrities were shilling their favorite coins (and plenty of scams), moms were buying meme coins, sh*tcoins were popping out almost daily – everybody was happy and making money. It was moon time.

But then things quickly changed…

Elon Musk betrayed us by talking about the energy costs of Bitcoin, which later turned out to be nonsense of course, and crippled the market trend. Bitcoin tanked from $60,000 to $30,000 and newer traders and investors were spooked.

Since then the narratives have been swinging from Bull to Bear. FAKE NEWS and FUD are the weapons of choices for Bears right now which makes the bull case look stronger for the 2nd half of 2021!

The UK Binance ban. Who wouldn’t be afraid? Especially if headlines read:

Yikes. Scary right? Except that as usual this headline is misleading. Clearly interested parties wanted to make some profits on their shorts as multiple news sites published this story with similarly scary (and inaccurate) headlines.

Take a moment to read the whole article and it is quite clear that binance is only banned from offering regulated services such as offering its clients to buy stock shares. Cryptocurrency however remains unregulated (as it always has been). So how does this “ban” affect UK citizens from trading cryptocurrencies and using ProfitFarmers?

“The FCA spokesperson clarified that the scope of the ban was limited. Though Binance Markets Limited is banned from offering regulated services in Britain, non-registered firms can still interact with U.K. consumers. That means Binance could still offer Brits crypto trading through its website.” – CNBC

Heres a statement from binance regarding the UK ban:

We are aware of recent reports about an FCA UK notice in relation to Binance Markets Limited (BML).

BML is a separate legal entity and does not offer any products or services via the https://t.co/QILSkzx7ac website. (1/4)

This story may continue to evolve but for now, UK nationals can relax.

For those of you that are concerned we encourage you to flex your democratic rights to freedom of choice. Contact your local MP’s on twitter (and other social media) and demand that they raise this concern publicly. Everyone should have the right to choose how they use their money without the government interfering or treating us like children. 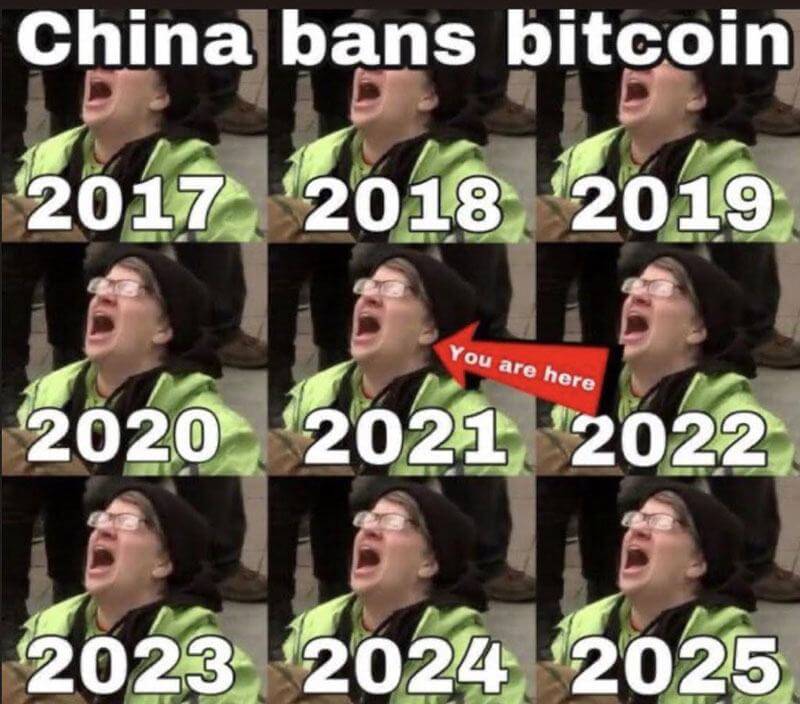 So, What is it this time? China has now banned Bitcoin miners from operating within the country. Yes, those guys that help verify your bitcoin transactions have now been kicked out by one of the MOST invasive and controlling regimes on earth.

Since May, the Chinese government has called for a severe crackdown on bitcoin mining and trading, setting off what’s being dubbed in crypto circles as “the great mining migration” This exodus is underway now, and it could be a game changer for crypto friendly countries. 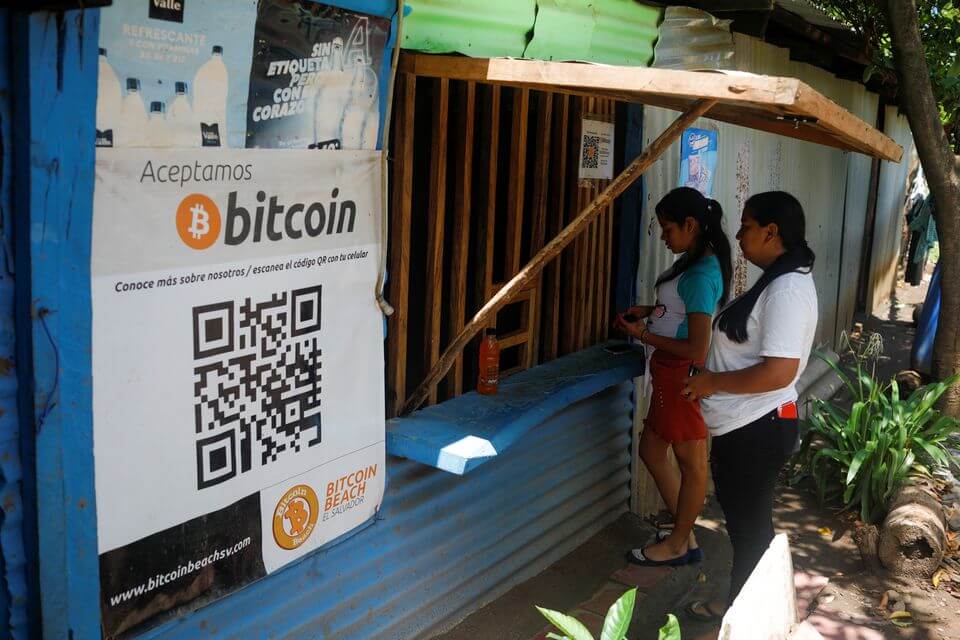 The #BitcoinLaw has been approved by a supermajority in the Salvadoran Congress.

Bitcoin is now legal tender in El Salvador. Let that sink in for a moment. History is being made!

In June 2021, El Salvador became the world’s first country to adopt bitcoin as legal tender, enacting legislation that takes effect in September 2021. This means that bitcoin can be used to pay for goods and services throughout the country, and El Salvador’s citizens and businesses are legally obliged to accept it.

“If you go to a McDonald’s or whatever, they cannot say we’re not going to take your bitcoin, they have to take it by law because it’s a legal tender,” Bukele said in an online conversation he held with crypto-currency industry figures in parallel to the debate in Congress.

In a tweet he made shortly before the vote in congress for Bitcoin to be made legal tender, he stated “It will bring financial inclusion, investment, tourism, innovation and economic development for our country”

Is history being made or will this decision ruin El Salvador’s economy? When will China stop banning crypto?

The good news is that all of these events are opening up people’s eyes to just how fragile our freedoms are. Bitcoin gives us an opportunity to ‘unsubscribe’ from the economic models that have kept the poor poor and the rich rich for hundreds of years.

That can only be BULLISH long term.

We recently launched the New CM family of Signal Strategies.

The Strategy aims to play Leveraged LONGS and SHORTS for a quick 2-5% move. This strategy is aimed at leveraged crypto traders who like to make quick returns. These are designed to trigger during choppy/sideways markets.

These signals will frequently be “closed early” due to the nature of choppy price action and failing micro-trends. 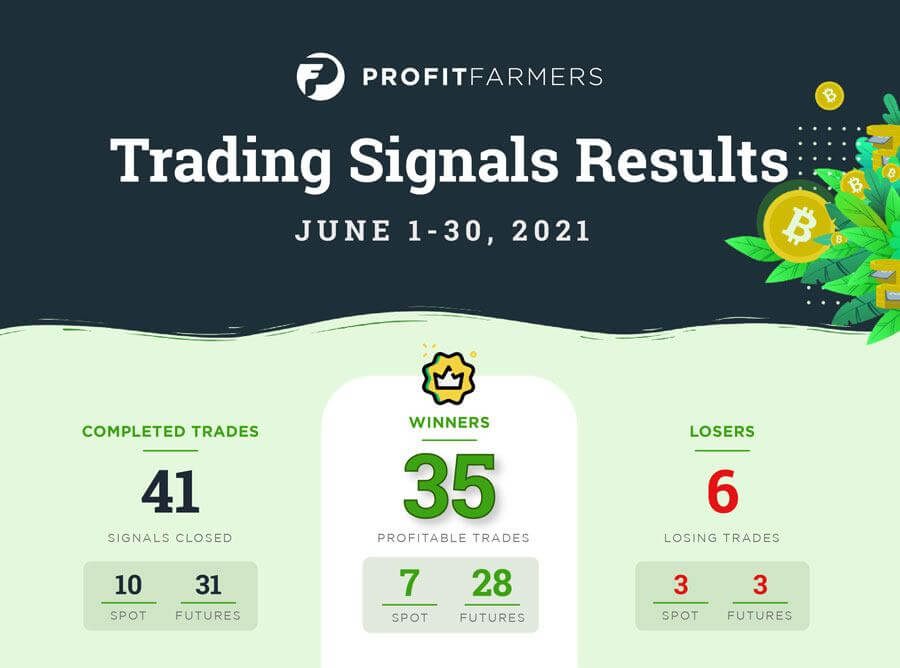 Our algorithms generated over 41 signals across the various strategies. When we broke down the winners and losers we saw 85.37% of them hitting at least target 1! That’s 35 out of 41 signals offering up at least some profit potential! Only 15% (6) of our signals generated and vetted by the experts went directly to stop-loss.

That’s much lower than previous months. Why? Because we are serious about trading and will not publish signals unless the risk makes sense! Sometimes the best trade is no trade at all!

If you do not understand that, you should not be trading.

Our signals are produced algorithmically. Meaning that they may appear at any time of the day! Here’s a graph showing when our signals were created for the month of June. 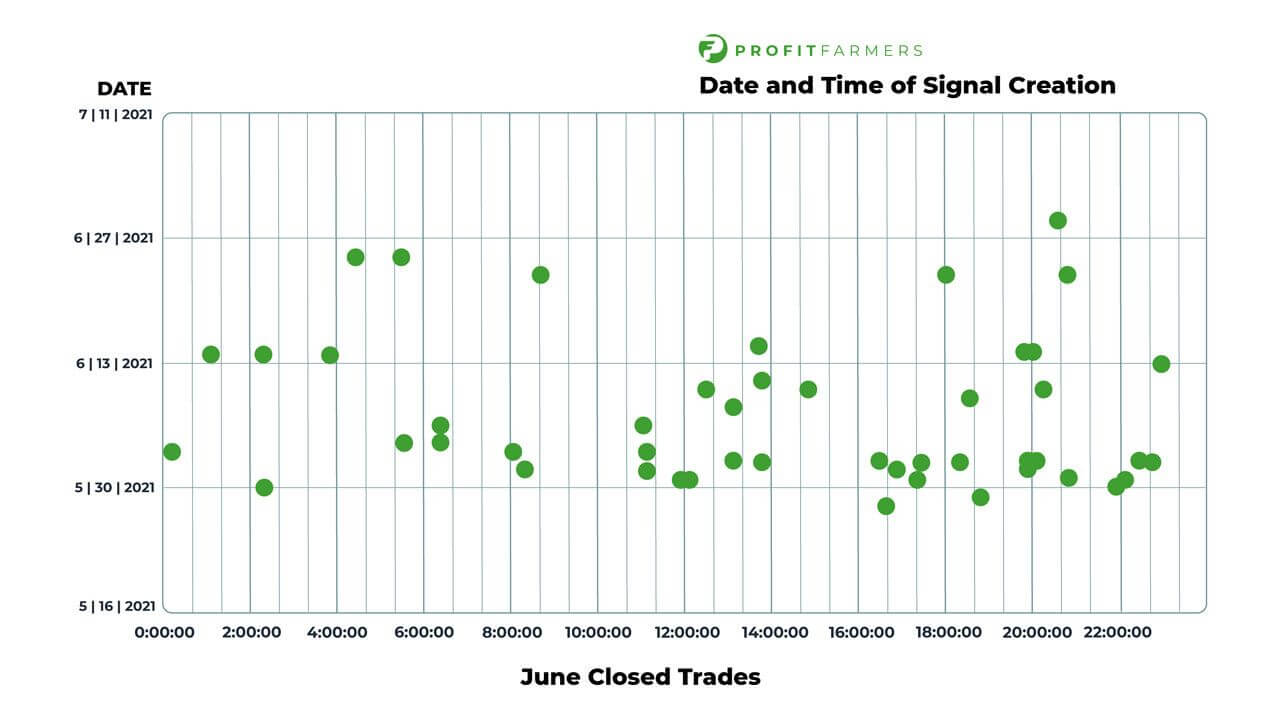 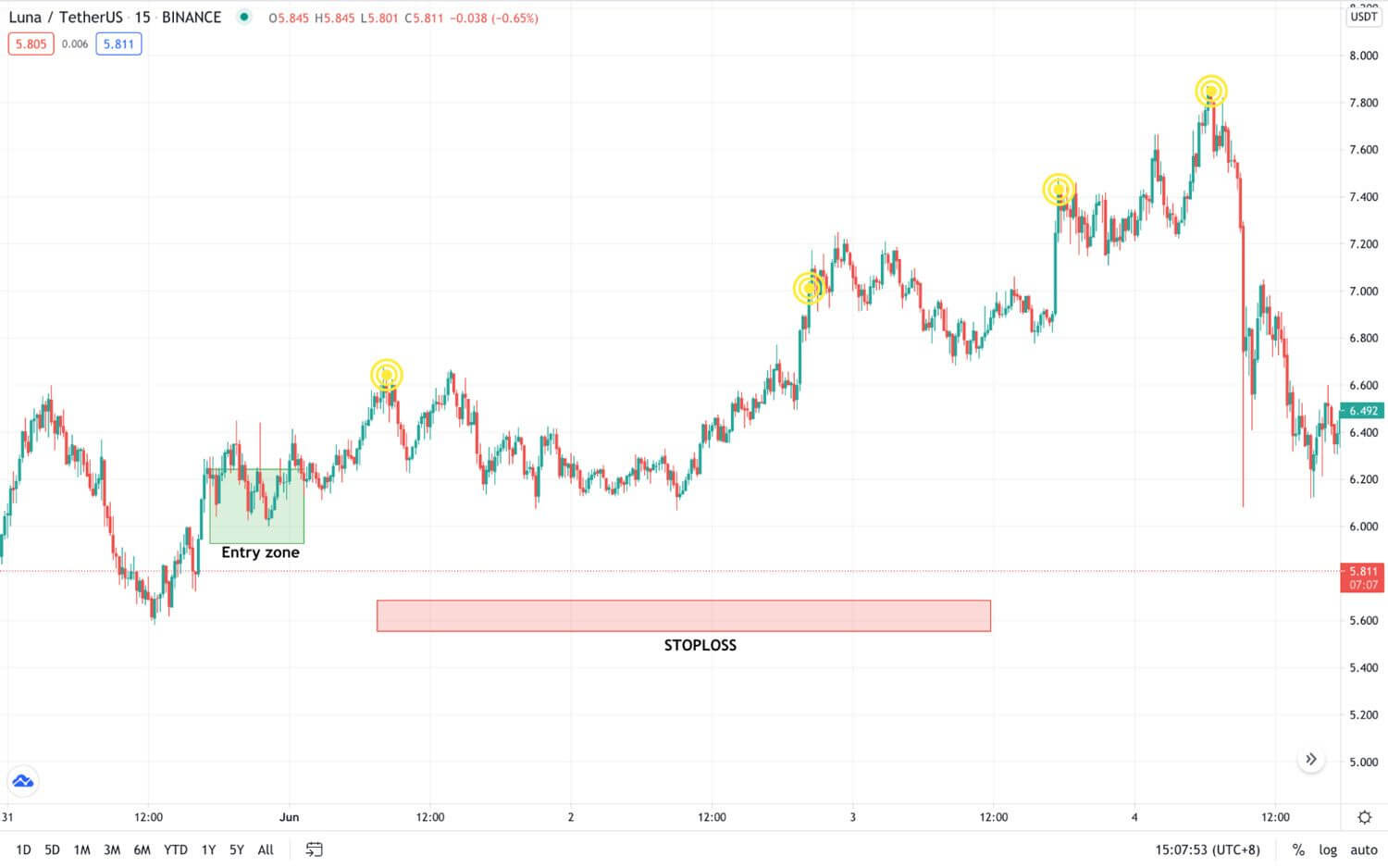 Despite June having an overall bearish sentiment, our algorithms managed to find this gem of a trade. Here are the highlights:

The ProfitFarmers that got into this trade managed to bag a 38% peak gain before walking away from a car crash. Talk about a great escape! 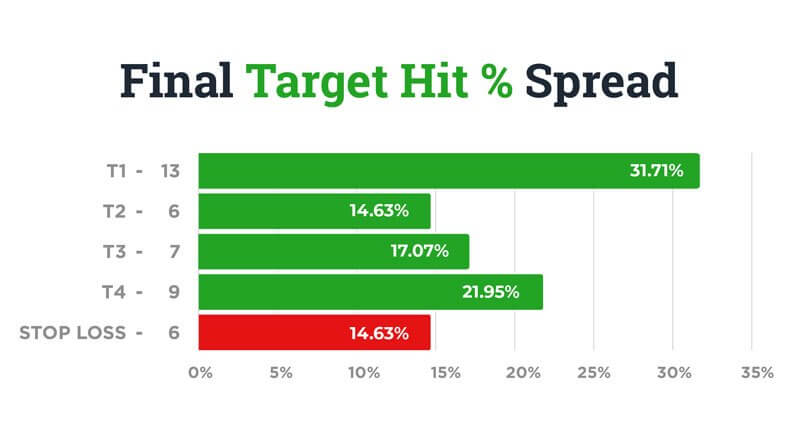 Approximately 54% of all the signals hit target 2, 3 or 4! Despite crypto being in a downward trend during this month, half of our signals generated great gains! 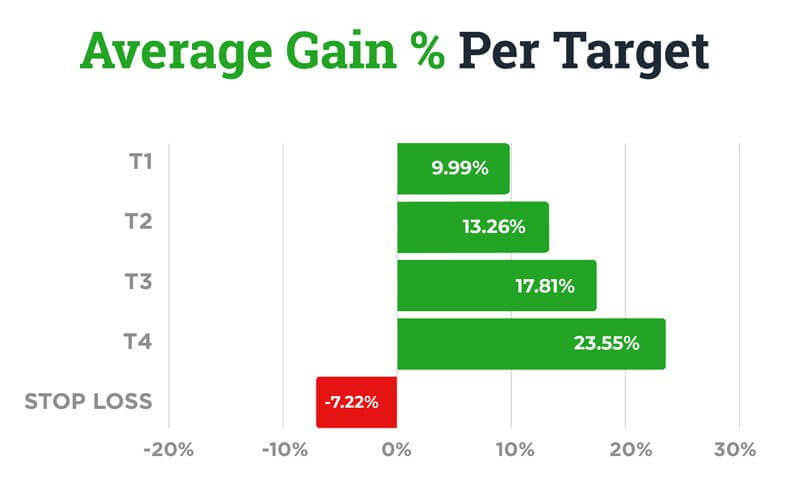 14.63% of trading signals generated hit Target 2 and achieved an average peak gain of +13%!

17.07% of trading signals generated hit Target 3 and achieved an average peak gain of +18%!

21.95% of trading signals generated hit Target 4 and achieved an average peak gain of +24%!

Only 15% of our signals hit stop loss and had an average loss of 7%. 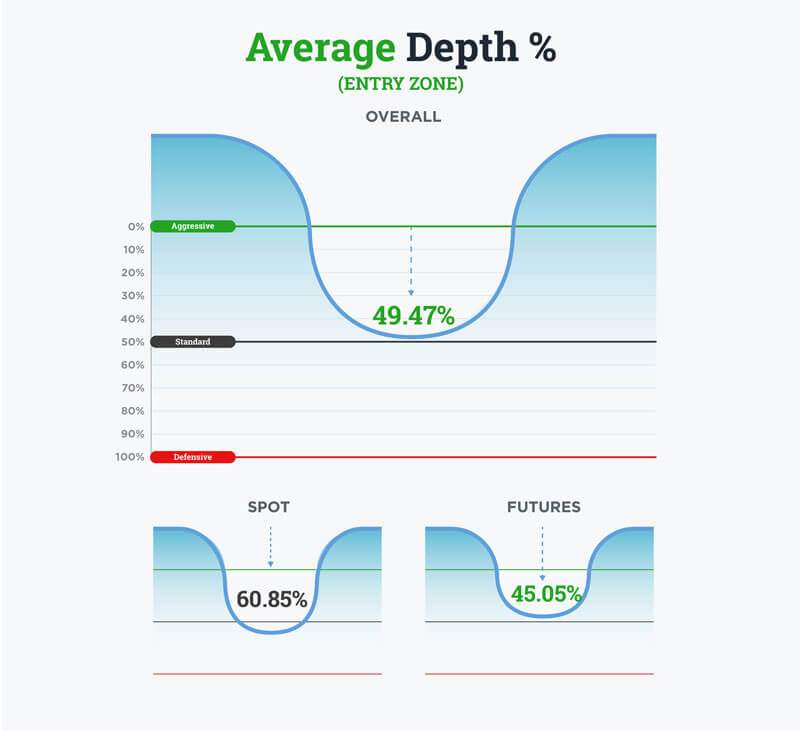 On average the price came down to the middle of the entry zone for all signals. You can see from the chart that SPOT trades tended to come down a little deeper than FUTURES trades.

If you are unsure of how to get the best entry zone…use our new laddering feature!

Our top 10 trades in June 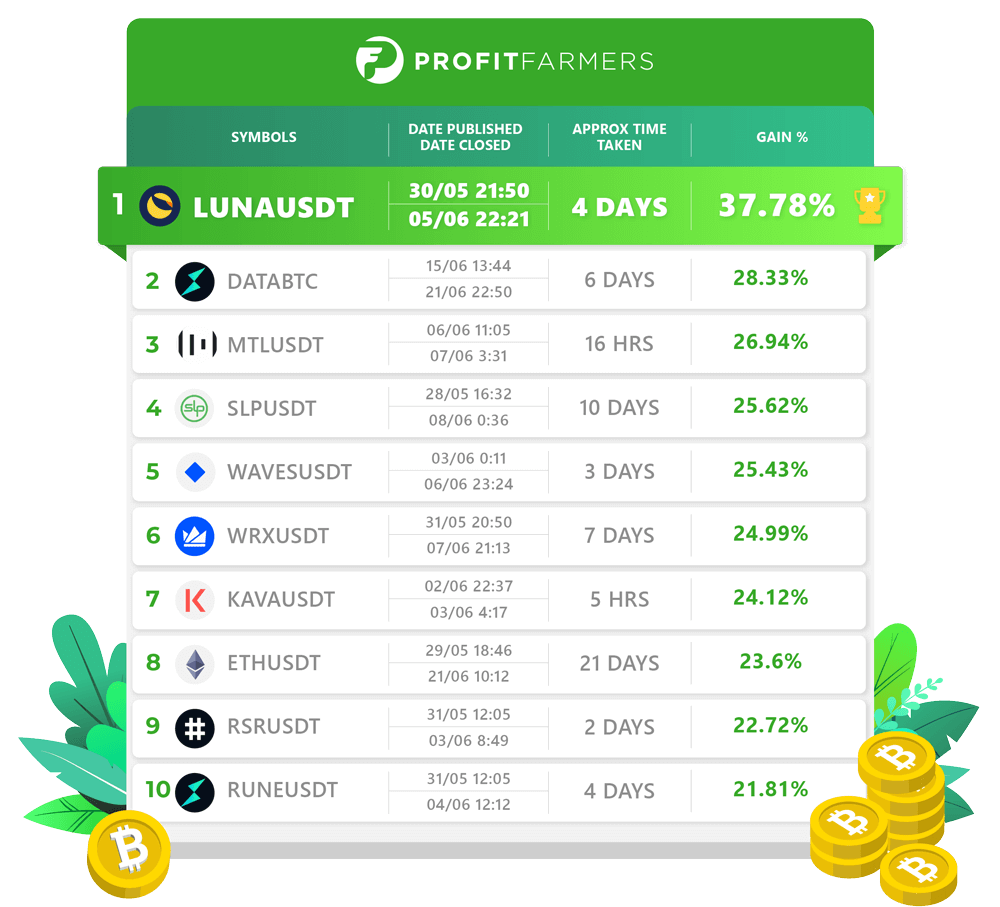 We’ve listed out the other top 10 trades over the month.

Approximately 10 trading signals managed to rack in peak gains of more than +20%. LUNAUSDT comes in first with a peak gain of almost 38%! USDT pairs far outperformed BTC pairs during June because of the market crash and Bitcoin Dominance growing.