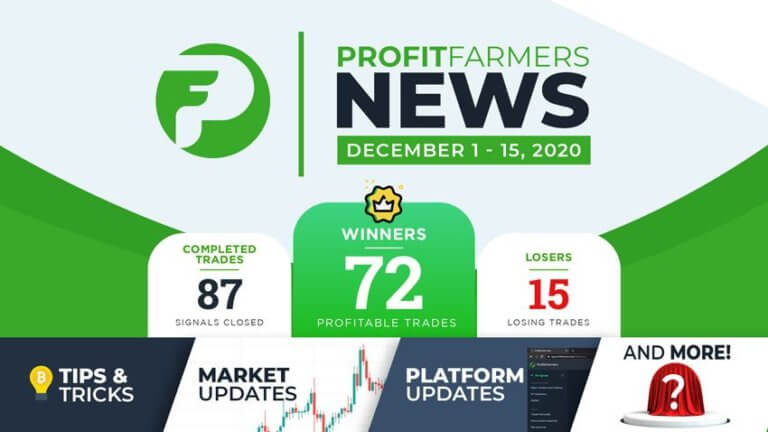 We’ve got some exciting news and mind blowing stats in our DECEMBER 1-15 update!

Headline numbers at a glance

After checking the signal statistics, we found that in just 15 days, we completed 87 signals! That’s around 6 seed signals closing every day!

Taking a closer look, we saw that 75 out of 87 signals hit at least target 1! That’s a massive 83% that offered some profit potential. That means the win rate is 2% higher compared to our Nov 1-15 stats!

Full futures signal copy-trading to be out before the end of the year!

In a previous blog, we announced that we will be rolling out Futures copy trading.

Earlier Futures signals were using spot price tracking since it has more price data. That meant if you wanted to trade Futures, you had to check the spot and futures price.

We’ve come a long way since then and have implemented a couple of helpful changes.

Right now, whenever you pick a Futures signal it will show:

That means if you wish to trade a Futures signal, there’s no need to check with the spot price!

(We’ll be updating our videos and articles to reflect these changes but in the meantime, simply ignore the parts where we tell you to check between the spot and futures price)

If you want to trade Futures signals, you can do so manually in Binance.

Don’t worry, the first version of Futures copy-trading system will be coming out before the end of this year if all goes well!

Is it altcoin season yet?

Previously, we’ve speculated that altcoin season is just around the corner. It seems like there’s going to be a breakout sooner rather than later.

There’s a useful altcoin season index which shows where we are at the moment. Take note though that this is a lagging indicator as it is measuring the price performance of coins over a previous date range.

At the time of writing, we’re in ‘Bitcoin season’ according to their chart but we can see a developing trend that should break out and see the start of altcoin season. 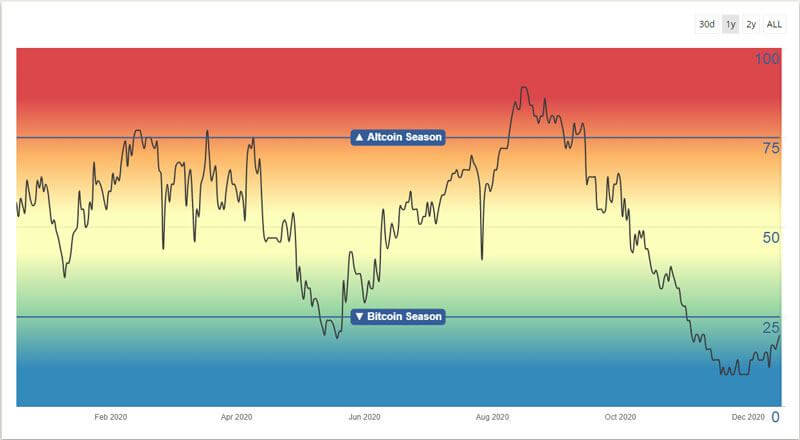 Bitcoin Dominance is currently breaking out though with an expectation that Bitcoin attempts another push for all time highs over $20,000. It is widely expected that after this, there will be a cooling off period where altcoins can really move!

NOTE: Since writing this Bitcoin did indeed breakout over $20k! 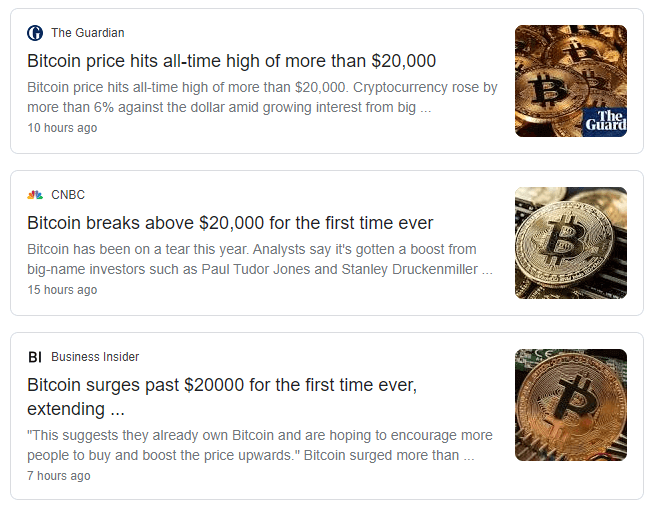 The bull run moves into its next phase as traders set their sites on a $30,000 target!

It’s been an amazing year for ProfitFarmers and we owe it all to you, our members. We’ve been gathering some feedback and want to give you a taste of some of the features and changes we might be diving into next year!

1. Late for a signal? Worry no more - Copy Trade at any stage

One of the more common issues being brought up is that sometimes signals bounce out of the entry zone too quickly (the market has just been so bullish recently sorry!). This prevents a new trade being created which sometimes is a little annoying!. While we made a video showing how you can easily follow a signal even if you are ‘late’, we understand that not everyone feels confident to trade manually.

So, we’re planning to make some changes that will allow you to copy the signals all the way up until they are closed.

As a stepping stone we will be changing the ‘fresh signals’ section to show you more of the signals that are still in the early stages of their life cycle so that you can more easily find some good trades to take.

Simply put, instead of just 1 entry price, we are investigating ways to allow you to input multiple entry prices at the same time with a % of your purchase at each level (just like how your take profit targets can be as many as you like). This would mean you can always get into any trade that drops into the entry zone without needing to think too much about the perfect price to try and pay.

Our mobile app is a great step in the right direction but we feel like we can improve it even further.

Particularly, we want to increase the speed of notifications. So we’re planning to build and migrate the notifications to a faster server!

Multiple members have asked us if we can teach them more about how to trade crypto and how to brush up on manual trading skills. We are keen to help people raise their game to make the most from the system so with that in mind we will be looking into creating some training courses! 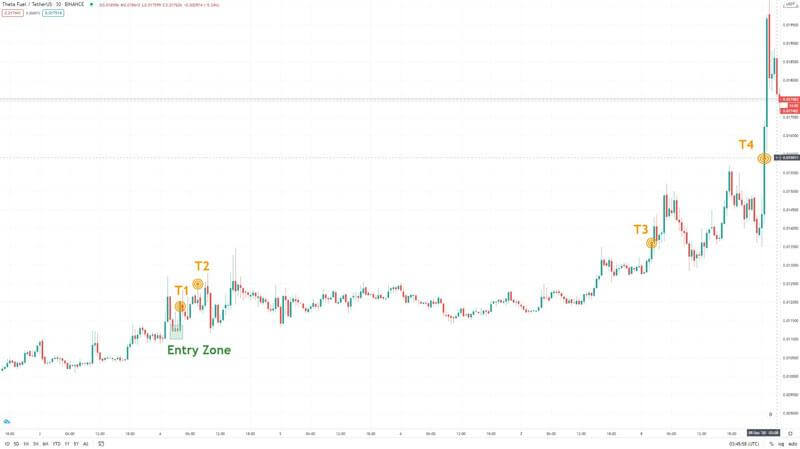 Based on the chart, we can see that the price dipped and sat in our entry zone chilling for a while! After an hour or so, it picked up momentum and skyrocketed to target 1, then hit target 2 in a couple of hours.

Then we saw a period of sideways action where the price ranged around 10% for 3 days.

On December 7th we saw the price quickly pick up momentum and broke resistance. There was a short retest, then another rally where we smashed through targets 3 and 4.

The trade concluded with TFUELUSDT reaching a peak gain of 42.08% in 5 days!

This is a classic example of a breakout from a range. Anyone watching the charts will have seen that T3 and 4 were somewhat inevitable after that breakout!

We’ve broken down our winners to find out which targets were being hit and what we saw put a smile on our face!: 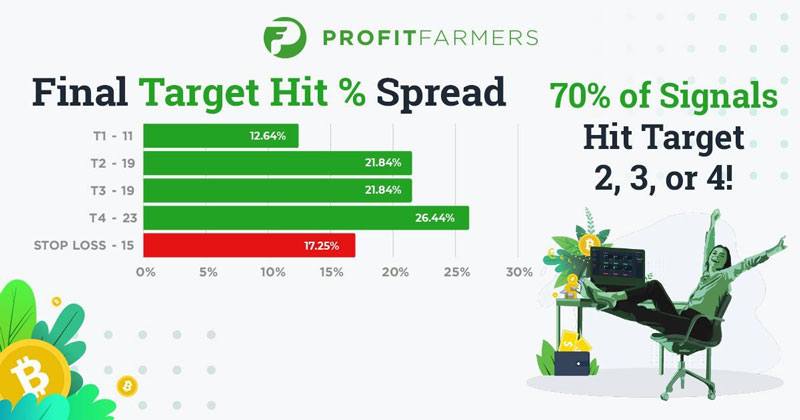 That is really an epic statistic. Think of it this way, even if you were late to a signal and joined at target 1 was hit…70% of the time you would make a gain all the way to target 2!

Based on the spread, there’s a bigger chance that your trade will hit target 4 than hitting stop loss! It’s starting to feel like bull run madness where you can close your eyes and aim for the higher targets without too much fear 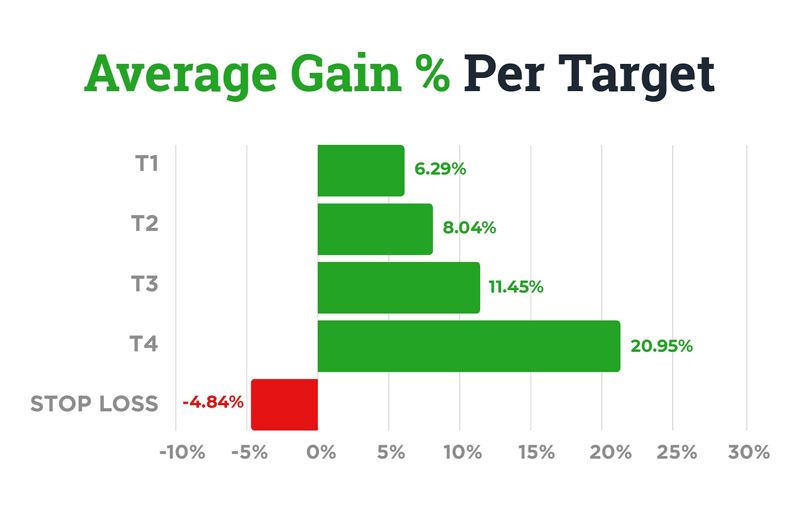 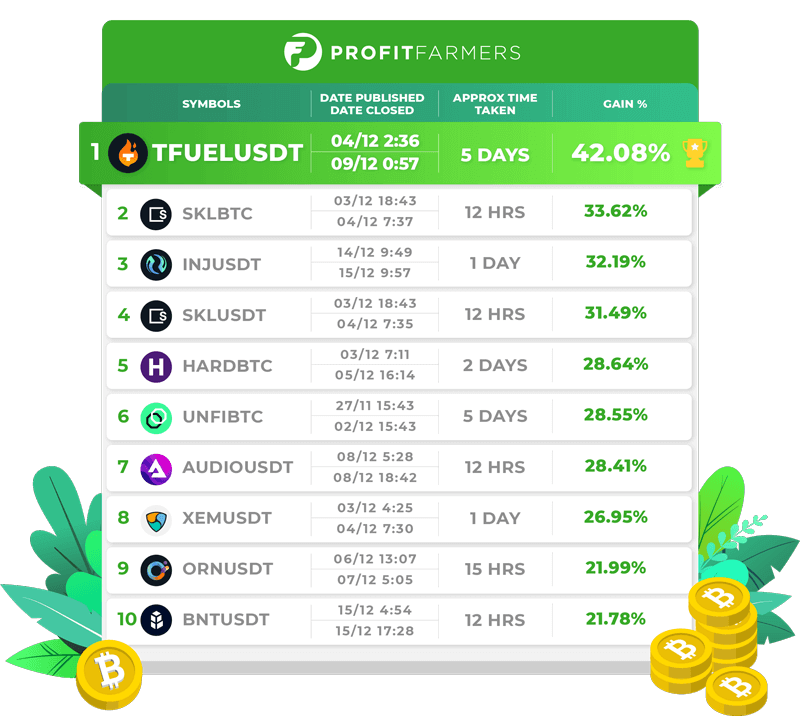 SKL made an appearance twice and went against both BTC and USDT. It’s made an incredible 33.62% and 31.49% respectively. Both trades closed in 12 hours!

Interesting questions from our community

How often do moments [volatility/big trends] like this one happens in a year? Actually, how much continuity can you have in this market?

Volatility is constant in crypto. The current upward trend will of course eventually turn into a downtrend. That’s also fine, as we can simply then follow the trends back down on the SHORT side until the market shows signs of forming a bottom. At that point..it’s back to going LONG! This cycle is endless, but of course there can be tricky periods of sideways ranging.

I was wondering what sort of deposit do I need to make to cover the monthly subscription and make a profit?

While there’s no minimum amount we recommend that you have at least $3000-$5000 worth of Bitcoin or USDT to trade with (this amount should be in your Binance.com account).

This is to ensure you can spread enough money across various trades without going ‘all in’. If you plan to use Binance Futures, you can turn $5000 into $100,000 using leverage! Which can help magnify your gains as long as you use good risk management.

As for profits, some of our members are able to cover their monthly fees with a single trade. Of course everyone will have a different situation and trade with a different approach.

Most months we have seen >60% of signals reaching target 2 for an average peak gain of around 8%-10%.

It goes without saying that the more trading experience you have and the more time you can put in, the more you will get out.

How long does one need to wait for a new trading signal? Hours, Days , Weeks…

It depends entirely on the market. Unlike the rather dubious signal groups you could find on telegram or facebook etc we do not spam signals out to ‘look busy. There are times when our algorithm picks out 10-20 signals in a day. Sometimes there are only 1-2.

We do our best to keep members up to date with the current climate and if we are expecting a slower period.

Remember that trading should be seen as a slow burn, it’s ok if you only make a few trades in a month (let alone a day!) as long as they are profitable and earn you your desired account growth quota.