Talk about bitcoin being bullish due to PayPal and about altcoins not doing too well – make it sound positive.

Bitcoin is on an incredible run right now after the news broke out where Paypal will be offering Crypto to 346 million customers! Although altcoins struggled a bit last month, our algorithms closed over 75 signals for the whole of October. We are very optimistic about altcoins gaining some momentum over the next few months though, as this usually happens when Bitcoin surges upwards.

When we broke down the winners and losers we saw a massive 79% of them hitting at least target 1! Quality over quantity!

In other words, 59 out of 75 signals offered some profit potential. Check out our top 10 trades for this month and you’d see the quality we’ve been pumping out for our members.

We also had 8 breakeven trades (we do not add them to our ‘completed trades’ statistics).

These are signals that were vetted by the system and closed early as part of quality control or the market not reacting as expected. These usually are closed in a small profit and a close early notification for these signals would appear on your dashboard.

Signal Algorithms Will Be Paused Until The US Election Completes

With the election only days away, now is the time for caution and protecting your capital. Therefore, signal algorithms will be paused until the U.S election is done.  Remember that it is just as important to hold your funds safely as it is to make gains. A 50% loss means you need to make a 100% gain on your remaining balance to get back to where you started. Keep that in mind!

It was added as another ‘strategy’ on the dropdown menu in the trading form next to the defensive, standard, and aggressive strategy. This strategy will be frequently updated by our trading experts so that we can easily adjust to market conditions!

We are on track to be ready to launch the feature in 4-6 weeks, the support material may naturally lag behind by a week or so as we will want to make some live recordings of how to use things as usual.

Futures copy-trading  will come at no extra cost to our existing members!

We created the official ProfitFarmers mobile app  to bring you all the highest-quality signals straight to your Android device (iOS users will have to wait just a little bit longer). This is essential for every ProfitFarmer out there!

The Academy  is your opportunity to learn everything about the ProfitFarmers platform, see how it all works, check out hints and tips, learn how you can begin copy trading using your Binance Exchange account, and more!

Wow, This trade took a while to finish! As you can see in the chart there’s a 17 day difference between targets 1 and 2, however the longevity of the trade didn’t stop IRISUSDT from becoming this month’s best as it managed to make 43% in peak gains!

If you noticed, a bulk of the signals hit target 2 (46%) – the settings we calibrated on the ‘Optimised strategy’ would have given you a high success rate!

Take a look at the average profit from each entry: 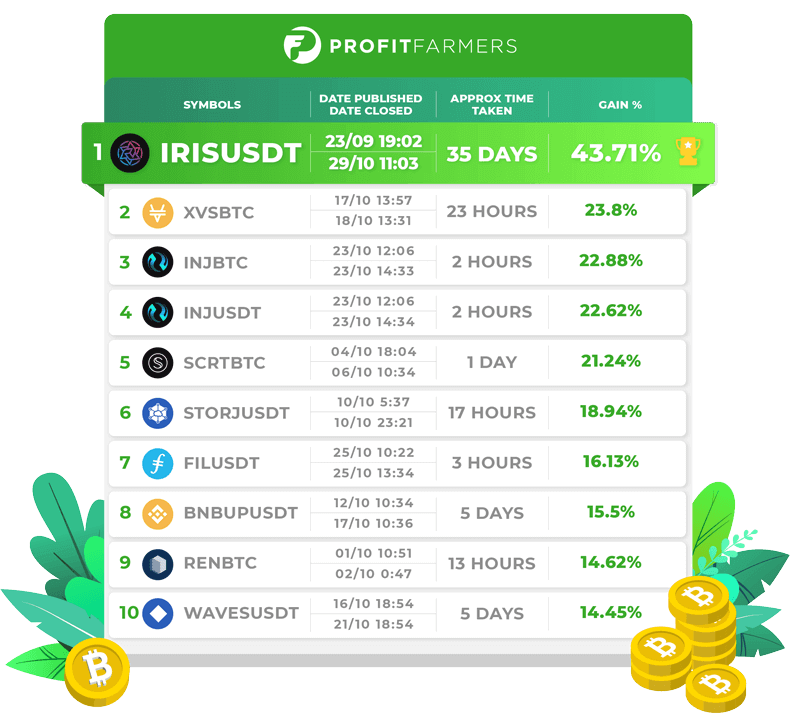 Although it took a month, IRISUSDT is our best trade as it made a solid 43% peak gain! Special mention goes to INJ coin pairings as they made +22% in only 2 hours.

Despite the uncertain market conditions our trading algorithms managed to reel in some excellent trades!

There’s a lot to look forward to next month, as bitcoin is currently at a high of almost $14,000 as of writing. If history repeats itself, we’re looking at a potential bull run for cryptocurrency. Fingers crossed!